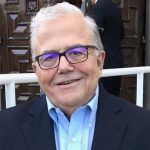 If Andrea Bocelli, were standing here today, he would sing the beautiful song, “Time to say Goodbye” but I’m only a little deacon, who has trouble tuning in the radio, never mind singing, and it falls to me, not really to say goodbye to my Brother Deacon Richard and his wife Pat, but to wish them well in their retirement as they return to New York To be close to their daughters, grandchildren and great granddaughter, Josephine. I say Deacon Richard and his wife Pat because they can really be seen as a unit of diaconal service here at Emmanuel. In fact, Richard has often said that it is because of Pat that he is a deacon, they both went through formation together, they both prayed and went to classes together and he says that at any time during formation she could have called the diocese and said that she was having second thoughts and was not going to support Richard to be ordained. So we thank you Deacon Richard and you Pat for your “yes” to God’s call.

Richard told me that about nineteen years ago he came to South Florida and went Parish hunting for a place where he could be of service, He heard that there was a priest looking for a deacon in Delray Beach. An Italian-American priest, a Pisano, Monsignor James Fiore. When they met there was an instant meeting of the hearts that continues today with Monsignor into eternity. We know that the bonds of friendship do not unravel with death and at significant parish events deacon Richard shared that he felt the presence of “Father Boss” as he affectionately referred to him. Monsignor shared his love of the people of Emmanuel and his vision for the parish with Richard and Pat which they whole heartedly embraced and implemented They enthusiastically engaged in ministry with the priests of the parish especially including Father Theo and Father Zamora. with the staff, Darlene, Christine, Eddie, and Anthony, and then Father Tim, Sister Mary Clare and myself.

A deacon is a man who is called to a ministry of service. Like bishops and priests he receives the Sacrament of Holy Orders. He is among the people of the parish but has been called forth to live the Christian life visibly in his parish and community. He is an ordained person, a clergyman living in lifestyle of the laity.

Today’s readings tell us of working in the vineyard of the Lord. Richard and Pat worked long and faithfully in the vineyard here in Emmanuel. Richard took care of the Liturgical ministers of the parish, the Eucharistic Ministers, lectors, ushers and altar services. He prepared couples for marriage and witnessed their marriages. Prepared parents for the baptism of their babies and Baptized the children. He led holy hours and prayer services, especially conducting wake services. In a sense we can say he was with us in all stages of human development, when we are born, Married and died. Or as Sister Mary Clare would say, when we are hatched, matched and dispatched.

Deacon Richard added to our understanding of our faith though his proclaiming the Gospel and applying the Gospel to our lives by his preaching every weekend at Mass. He and Pat were faithful to prayer, to meeting the Lord in the reading of Scripture, in meditating on the scriptures, sharing it in Bible Study and giving to others the fruits of their meditating. And Richard I am personally indebted to you for your example in preaching, Just about everyone I know wanted to have you preach at their funeral. I gotta tell ya though, I wasn’t so anxious.

In addition to his liturgical ministry Deacon Richard was devoted to the ministry of service, of serving the community in need of food. With the help of the Knights of Columbus of which he was not only a member but also Deputy Chaplain, along with his brother Knights he would coordinate Parish Food Drives and share the food collected with Cross Ministries here in Delray Beach.

I know that this might sound like a long litany of accomplishments, but more important than what Deacon Richard and Pat did was their presence among us and how they lived the Christian life of Prayer and faith in imitation of Christ himself who came not to be served but to serve.